Last decade’s economic crisis took a pretty significant toll on commercial real estate. While it may have taken a few years to begin seeing a recovery, commercial real estate markets all across the United States are gaining momentum. According to CBRE's 2017 Americas Occupier Survey, nationwide office vacancy was down to just 12.9% in Q4 2016, the lowest figure since 2008. If the still-improving CRE market is any indication, those numbers could continue to improve as 2017 progresses.

This is great news for landlords and property managers, but unlike the residential market, attracting top-notch commercial tenants isn’t as easy as hanging a “for lease” sign and waiting for inbound applications. Driving commercial leasing means knowing what types of businesses are growing and how your building can set itself apart from other nearby properties. To do so, many landlords are focusing on making their buildings more tech-friendly through upgraded modern amenities, reliable connectivity, and even some pretty clever marketing slogans.

Does branding your office building as a tech-forward destination really draw top-notch tenants? Boasting tenants like Amazon, WeWork, and United Healthcare, the six buildings below make a case for highlighting connectivity in your next CRE marketing campaign.

Forbes has listed Washington DC as one of the fastest-growing tech centers in the United States, and few properties in the city exemplify that fact more than The Homer Building and its slogan, “High-Tech High-Class”. With over 400,000 square feet of leasable space, direct access to the DC Metro system, a Platinum-level Wired Certification, and some of the highest-rated broadband connectivity in the DC Metro Area, The Homer Building has been able to attract a number of big-name companies including General Mills as well as cutting edge bio-pharmaceutical companies like Amgen and the American Academy of Pediatrics . 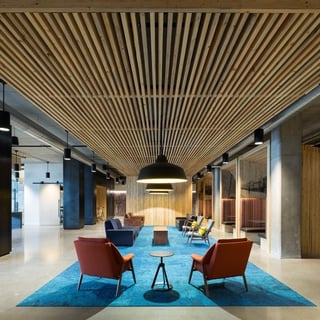 Welcoming Amazon as the building's first major tenant, the T3 building is putting Minneapolis’ North Loop on the map as a center for technological innovation. With 210,000 square feet of office space, T3 fully embraces its namesake slogan of “T3: Timber, Transit, and Technology” through its sustainable engineered-wood construction, convenient access to both public transportation and multiple major roadways, and the inclusion of modern tech infrastructure with access to ultrafast internet service providers. The building offers Wi-Fi in its community lounge space on the first floor, as well as its rooftop deck.

Chicago Board of Trade Building – Connected / Power Up

With a total of 1.3 million leasable square feet split between two structures, the CBOT building has everything from wellness providers to a twenty-four-hour fitness center available to its tenants while boasting an impressive 15 internet service providers and a antenna system designed for better cell phone reception throughout the building. The property also offers concierge services and boasts the coveted Platinum Wired Certification, setting the property apart from other spaces in the area by recognizing its top-of-the-line connectivity and business-ready network infrastructure.

Located in the Dumbo (Down Under the Manhattan Bridge Overpass) neighborhood of Brooklyn, Dumbo Heights boasts the slogan “Unrivaled Connectivity” to highlight just how important being connected is in today’s rapidly-evolving business environment. The Dumbo Heights development has attracted major tech tenants like Etsy and WeWork - companies that will complement the steadily increasing number of businesses in the surrounding Brooklyn Tech Triangle, including tech startups, wellness providers, retail shops, and specialty food vendors.

Long considered one of New York City’s leading downtown tech properties thanks to it's innovative 24,000 square foot Digital Sandbox which offers high-tech teleconferencing, the 30-story 55 Broad reaffirms its reputation as an information technology center through its slogan, “Totally Wired”. With a Platinum Wired Certification, 400,000 square feet of prime Financial District office space, and a slew of major tech tenants including Nokia, Level 3, Sun Microsystems and Carnegie Mellon, it’s no surprise that 55 Broad is one of the Manhattan's most attractive office buildings for tech companies.

One of the premier office buildings in downtown Newark, 2 Gateway is part of the sprawling 2.6 million-square-foot Gateway Center development which includes both office and retail space, as well as an on-site hotel and conference center. Known for the slogan, “TECHnically Better” thanks to it's location directly atop a fiberoptic hub, 2 Gateway offers access to a variety of high-speed internet service providers and networks to high-profile tenants like Standard Chartered and United Healthcare, and was the very first commercial property in New Jersey to obtain the Platinum Wired Certification.

Enter your details below and someone from our team will be in touch.