Ask anyone in this industry and they’ll tell you: commercial real estate has traditionally lagged behind other industries in terms of technology. But in the past several years, the commercial real estate landscape has been flourishing with new concepts and even newer tech innovations. The DisruptCRE conference, held in late March in New York City, is well-known for showcasing the most innovative concepts in technology and commercial real estate, and this year’s event was no different. Presenters from established real estate companies like DTZ, Cushman & Wakefield, and CBRE mingled with innovative CRE startups like Hightower, VTS, Fundrise and Floored, while exploring how technology is facilitating changes in the future of investing, developing, managing, leasing, buying, and selling commercial properties.

One particular panel, called "Pardon the Disruption: Technologies Connecting Us to the Buildings of the Future", touched on CRE tech trends and featured speakers from Colliers, Newmark Grubb Knight Frank, F9 Analytics and High-Rise Facilities Magazine as well as WiredScore’s own CEO and Co-Founder Arie Barendrecht. 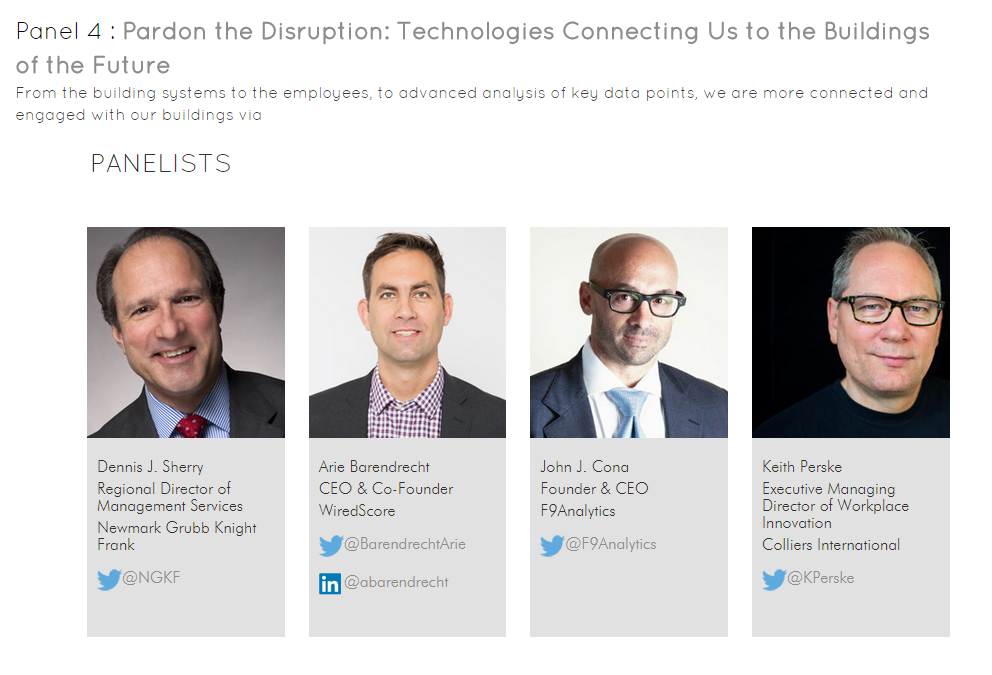 The "Pardon the Disruption: Technologies Connecting Us to the Buildings of the Future" panel

As the attendees listened eagerly, the panel’s first question delved into the topic of technology right away, with moderator Travis Barrington, Publisher of Highrise Facilities Magazine, asking which major technologies owners and managers are currently adopting. Barendrecht noted that connectivity investments have been on the rise, coinciding with the rise in data usage. “The big investment we’re seeing is about helping people inside buildings stay connected,” he explained, “And with the proliferation of mobile devices, that’s becoming more and more important. Right now there are ten billion connected devices in the world. That’ll be about 30 billion by 2020, and about 70-80% of that mobile traffic is not on outdoor networks. It’s happening within buildings, mostly the office buildings where we’re spending a majority of our time.”

Building owners and landlords are using technologies to differentiate themselves and provide technology that allows their tenants to remain connected at all times of the day. When asked specifically which technology building owners are implementing to solve this problem, Arie immediately answered, “DAS, or Distributed Antenna Systems,”.  He continued, “DAS technology basically creates an in-building phone network so that our cell phones work, and it’s incredibly powerful. The real estate community over the last couple of years has been a little slow to adopt it, but now that the carriers are on board, the big owners across the city are really adopting the technology, especially in buildings that are 15 floors or higher where it really matters and where people lose their cellular connections.”

Keith Perske, the Executive Managing Director of Workspace Innovation at Colliers answered unequivocally, “We can work separate from each other. But we’re not going to. Humans work better when we work together.” He went on, “When we see each other, when we’re sharing experiences that aren’t just work, that are larger than what we do, it gives context and intention to our lives. I think location from a technology point of view is irrelevant since we’re such a digital society, but from a human perspective, that isn’t going to happen.”

Barendrecht echoed the sentiment, “When these new technologies came out, some were saying that it would separate people, and people would not need to speak face-to-face and relationships would be weaker, but instead, technology has strengthened relationships. They’re actually finding the opposite of what you'd think was intuitive within new technology platforms.”

Surprisingly, the panel shifted towards a new understanding: ultimately, the common thread through the “Technologies Connecting Us to the Buildings of the Future” panel was actually about the technologies that connect people to each other. And although the afternoon’s talks were organized and centered on buildings and technology, at the end of the day, DisruptCRE's visionaries agreed that connectivity is really all about connecting people, and technology must be more focused on transforming the way people collaborate within built environments. 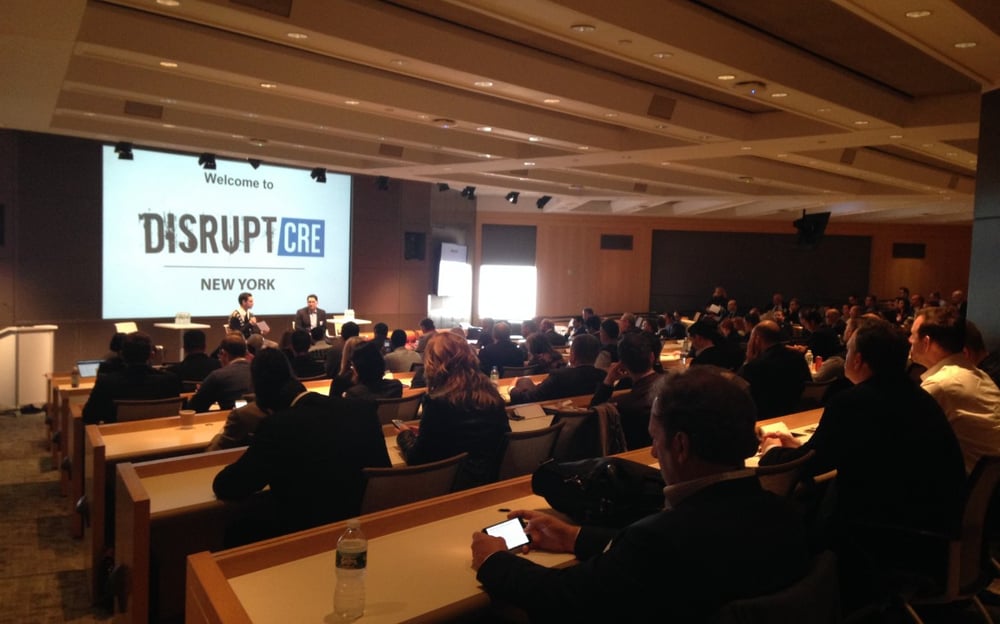 The crowd at the "Technologies Connecting Us to the Building of the Future" panel at DisruptCRE.